Set up in October 1988 in the School of Plant Sciences (now moved to the School of Agriculture, Policy and Development ) at the University of Reading (UK), the project aimed to collate all the records of cocoa (Theobroma cacao L.) germplasm collected in the wild into a single computerised database. Initial funding was provided by BCCCA (The Biscuit, Cake, Chocolate Confectionery Association), now the Cocoa Research Association (CRA Ltd.) , with support from the International Plant Genetic Resources Institute (IPGRI), now Bioversity International .

By 1990, the aims of the project were extended "to make more widely available published information on all cocoa clones, their origins, their characteristics, and where they are currently being grown". The database became the International Cocoa Germplasm Database, or ICGD, and computerised versions of the database have been distributed since 1991 and printed forms were released in 1992 and 1997.

Information in the database has been obtained from publications, research meeting proceedings and reports sent directly to the ICGD from individual researchers from research institutions and genebanks. The database has been under constant development and is currently being modified to allow online access to all the data.

The ICGD is now funded by the UK cocoa trade via levies raised through ICE Futures Europe (London Cocoa futures). CRA Ltd. continues to support and administer the project and it remains an important part of the CRA Cocoa Research Programme. 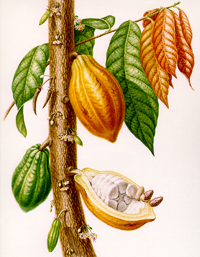